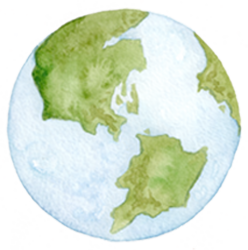 The planet that houses us! Home sweet home! We’re talking today about our beloved planet Earth.

It’s easy to assume we know all the facts about Earth, after all we do live on it! But every day Earth continues to surprise us, and still there are so much more we don’t know. Let us discuss some of Earth’s coolest facts together

It's surely our responsibility to do everything within our power to create a planet that provides a home not just for us, but for all life on Earth.

Earth rotates around itself, but it doesn’t rotate vertically! Rather, it rotates while being a bit tilted from a vertical position. Now you might think “okay then makes no difference to me!” But actually, that makes all the difference – it influences summer and winter!

the Earth is the only planet in the solar system with only one moon. But occasionally, the Earth traps some rocks and asteroids into its orbit for some time before they continue on their journey in the solar system. A pretty strong planet that Earth!

So many factors are responsible for humans being able to live on Earth, one of these factors is Earth’s atmosphere and how it consists of 78% of nitrogen gas, and 21% of oxygen gas, and 1% other gases.

Our atmosphere is also thick enough that it keeps us safe from many meteorites that come by Earth’s way. They end up burning up in the atmosphere and posing no threat to Earth. So Earth’s atmosphere, thank you for the rescue!

Our friend in orbit

It's not just the moon orbiting Earth - many human-made objects are also in orbit around our planet, these objects are called “Satellites” which literally means “an object in orbit of another.” Many of these satellites up there are remotely imaging Earth to predict weather patterns or warn us against hurricanes or very bad storms, other satellites are used to broadcast TV signals.

One of the biggest satellites around Earth is the “International Space Station” or “ISS” for short, it orbits Earth at a distance of 400Km (240 miles) and that’s where astronauts live in space and perform scientific experiments, super cool if you ask me!

The only life that we know of, so far...

Many of us would take this fact for granted, but actually, knowing what we know now about the evolution of life on Earth, life should exist elsewhere in the universe as well! But so far, life is still nowhere else to be found! Maybe that’s because scientists have been searching for forms of life that look like us, and it’s now time to start searching for forms of lives different than our own, or as scientists like to call it “life as we don’t know it.”