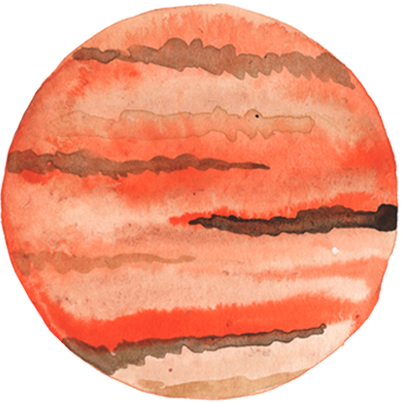 Named after the king of the ancient Roman gods, Jupiter is the biggest planet in the Solar System and the most marvellous with its cloud stripes of various colours. In this short article, we’ll find out 6 interesting facts about Jupiter.

Jupiter, a world far larger than Earth, is so warm that it currently radiates more internal heat than it receives from the Sun.

It’s gaseous, and it’s a giant.

Jupiter is not a rocky planet, it doesn’t have any surface to walk on like Earth and the rest of the inner four planets. Rather, it’s a gaseous planet that we call a “Gas giant.”

Gas giants are sometimes commonly known as “failed stars” because their atmospheres (and that of Jupiter) consist of hydrogen and helium similar to the atmosphere of stars. But don’t worry, Jupiter or any gas giant will not turn into a star even if they were much more massive.

Deeper and deeper into Jupiter’s atmosphere, the pressure and temperature get higher and hydrogen exists in its liquid form! But the core of Jupiter is still a mystery - it could be a solid core or a hot dense ocean. Scientists are still in the dark about that.

We don’t kid when we say that Jupiter is a giant, there’s no exaggeration there! Jupiter is 69,911km (43,440.7 miles) in radius, and to help you imagine how big that number is you’d have to put 11 planets Earths together to make the same width.

In addition to that, Jupiter is more than twice as big in mass as all other planets in the Solar System combined!

One of the brightest.

We know that the Moon is the brightest object in the night sky, followed by the planet Venus, and in the third place we find Jupiter. During clear nights, you can enjoy Jupiter’s brightness with the naked eye without the need for a telescope.

Jupiter spins around its axis so fast that a day on it is only about 10 hours, making it the planet with the shortest day in the Solar System.

You know how Saturn has those lovely rings around it? Well, so does Jupiter. Because they’re not visible with the naked eye, or even by telescopes from the ground, Jupiter’s rings were a surprise when they were discovered back in 1979 by the “Voyager 1” spacecraft.

Jupiter’s rings are very faint, made of dust particles that are believed to be the result of crashed meteoroids in Jupiter’s moons.

Extra fact: all of the four outer gaseous planets have rings as well!

Jupiter creates amazing photos thanks to it’s colourful clouds, and then there’s the famous “Great Red Spot.” But get this! The beautiful red spot is actually a storm that’s two times as big as the whole of planet Earth.

Oval in shape and reddish/orangish in colour, the great red spot has been known and observed for almost 300 years in the past, but it’s size has been varying across the years. Some scientists have estimated that the great red spot also has a thickness that extends up to 170 kilometers (105 miles.)

You’ll be surprised to know that another red spot, known as the “Little red spot” has recently been observed on Jupiter with half the size of the great red spot.