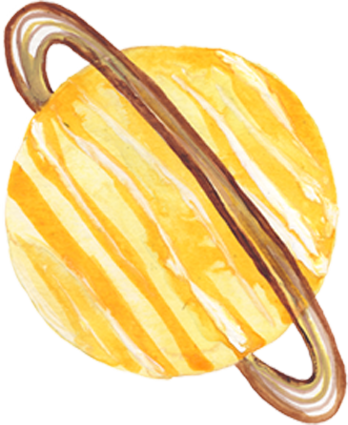 Saturn is arguably everyone’s favourite planet in the Solar System. Why? Because it’s the one with the rings around it! It’s gravity doesn’t only capture a giant ring system, but also the hearts of people on Earth; young and old. Let’s learn together 6 intriguing facts about Saturn.

The scientific theory I like best is that the rings of Saturn are composed entirely of lost airline luggage.

The first thing anybody notices about Saturn is its marvellous ring system, and I say “system” because indeed the rings are a system reaching as far as 282,000km (175,000 miles) from Saturn!

Seeing Saturn from a personal telescope, you might think the rings are a solid donut shape, but no. The rings are divided into 8 groups named alphabetically based on the date of their discovery.

Each group of rings is close to the other but not touching, additionally, there’s a wide gap between two of the groups that extends as far out as 4,700km (2,920 miles.)

The rings of Saturn are very diverse in terms of size and origin. They can be made of grains of ice and rocks as small as rice, or as big as a house! Regarding their origin, scientists believe they came from asteroids and comets that crashed into Saturn and then got captured by its gravity.

But better get a look at them quickly, because they might not last! 300 million years in the future we may not be as lucky in witnessing the beauty of Saturn’s rings as we are now. This conclusion came after research from NASA back in 2018 that discovered how Saturn’s gravity is swallowing ring material at a small and steady rate. So they’ll be gone eventually.

Saturn is the planet who’s never lonely. Not only is it surrounded with 8 groups of rings, but it also has the largest number of moons in the Solar System - a title previously held by Jupiter. The total number of confirmed Saturn moons is 53, with another 29 predicted and waiting for confirmation, which makes a total of 82 moons. Quite cosy in the Saturnian neighbourhood!

This fact is a sort of believe-it-or-not, fun Saturn fact. Ready? Here we go.

Saturn would actually float on water, making it the only planet that can do that in the Solar System! Weird? Ok, hear us out…

Saturn is mostly made of hydrogen and helium which are the lightest elements in the universe, making the mass and density of Saturn very, very low. So low in fact, that it’s actually lower than the density of water!

This means that, assuming you could find a body of water large enough to place the second largest planet in the solar system on, the whole planet would…float!

Auroras (like the Northern Lights) on Earth are a sight of wonder, but they’re not an exclusive phenomenon to our planet. Other planets in the Solar System have auroras as well, including Saturn. But how they form is not exactly the same; auroras on Earth form as a result of solar particles interacting with Earth’s magnetic field.

Auroras on Saturn on the other hand, are not fully understood yet. We know they form when particles shoot off Saturn's moons and interact with the planet’s magnetic field, that rotates very fast and 578 times stronger than Earth’s magnetic field. But we don’t know the details…

Three spacecrafts flew by Saturn across the past years, but a fourth and final spacecraft called “Cassini” really dedicated itself to exploring Saturn and its many moons up close for 13 years, creating breath-taking images. The mission was an international effort launched back in 1997, and arrived at Saturn in 2004.

In 2017 the team ended Cassini’s mission by directing it to go directly into Saturn’s atmosphere where it took its last breath, dying under the immense pressure of the huge ringed planet.