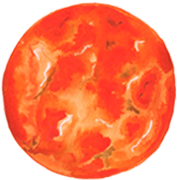 Take a look at your Planets In Time print, and spot the second planet out from the Sun – bright red (as pictured above). See it? That’s Venus.

Venus is the second innermost planet in the solar system, and shines so brightly in the night sky that ancient Romans named it after their goddess of love and beauty. But is Venus really that lovely?

There are so many stars shining in the sky, so many beautiful things winking at you, but when Venus comes out, all the others are waned, they are pushed to the background.

Not so pretty close up

while the ancient Romans stargazed and dreamt of Venus being the most beautiful planet, they could not see what lay on its surface, or know anything about its formation.

Fast forward to today, we are lucky to have enough information on Venus, and be warned - we absolutely shouldn’t visit in person!

This is because around 300-500 million years ago, Venus was probably covered by volcanoes. Tens of thousands of these volcanoes may still be active until today, with lava flowing out of them and carving canals that are more than 3000 miles long. And while volcanoes might be the very picture of beauty for some, it might be a good idea for humans to stay away from Venus until it’s had some more time to “cool off.”

Unsurprisingly for a world covered in volcanoes spewing lava across it’s surface, it’s quite a hot place. Venus is hands down the hottest planet in the solar system, an accolade that you think would belong to Mercury as the closest planet to the sun, but the solar system is not that simple.

Venus has a very dense and thick atmosphere, the kind of atmosphere that has a lot of carbon dioxide and sulfuric acid and other “greenhouse effect” gases that end up trapping heat on Venus and making it hotter and hotter. That’s actually the same reason why Earth is getting hotter every year.

The Sun and the Moon are the brightest objects in the morning and the night sky, respectively. And right after the Moon, it’s Venus in second place! Venus appears so bright in the night sky that it beats all the stars in the universe in our eyes.

If Earth had a twin sister

It's so often said that Venus is Earth’s twin, and that’s mainly because both planets are similar in many parameters: size, mass, gravity. Venus is just a tiny bit smaller than Earth, having a mass of up to 80% versus that of our planet. Both Venus and Earth have similar iron core sizes, and even the colour of rocks on Venus is similar to that of rocks on Earth.

Ever seen the sun rise in the west and set in the east? You will if you were on Venus! And that’s because the planet spins in the opposite direction of Earth’s rotation. It make’s no difference to anything!

Many space missions flew past Venus and even orbited it, but very few have actually landed on it - and none of those that have landed have survived more than 127 minutes on its surface!

We’re sure Venus has got nothing against humans exploring it, but the planet can’t help being so hot and so it damages all the landers and electronics within minutes.

The spacecraft “Venera 13” landed on Venus back in 1982 and lasted around 127 minutes on its surface, and a few other “Venera” series missions (that belonged to the Soviet Union) landed on Venus as well – all were damaged in less than 127 minutes!